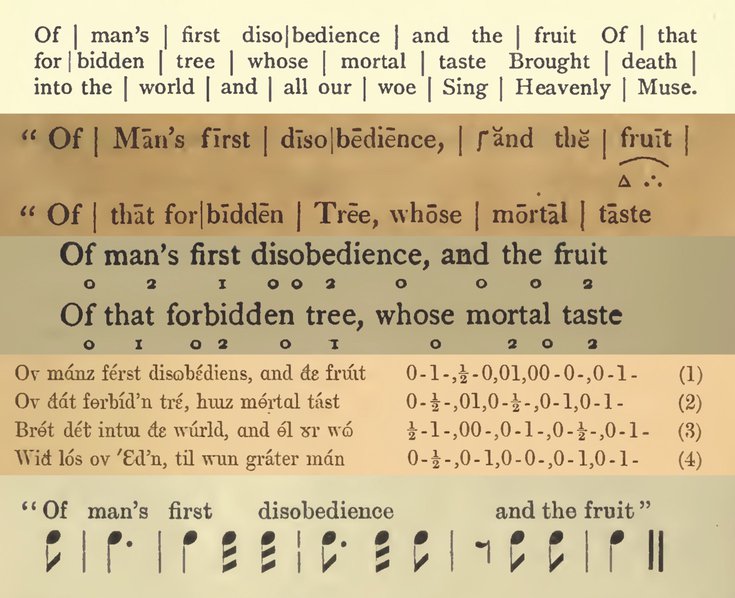 In its most general sense, “prosody” refers to the study of both versification in poetry and pronunciation. Versification includes a poem’s rhythm, meter, and rhyme and other formal features (alliteration, lineation, fixed forms like the sonnet). Pronunciation is a bit more contentious, but relates to accent, tone, cadence, pitch, and anything that concerns how a poem might sound when read out loud. Historical prosodic materials show how poets and critics theorized poetry, how it was taught in schools, and how debates about pronunciation were inflected with national discourses (e.g. eradicating or preserving dialects), and how each of these changed over time. Scholars of aesthetics, of literary history, of the history of the English language, of linguistics, of education, and of comparative literature will find that prosodic discourse reveals the genealogy of many critical concepts – such as what qualifies as a sonnet, how to distinguish between an iamb and an anapest, and where we find the influence of (for example) Aristotle’s or Hegel’s ideas about poetic form.

In short, the Princeton Prosody Archive (PPA) is an incomplete, yet full-text searchable database of thousands of digitized prosodic works published between 1569 and 1923. It collects historical documents and highlights discourses about the study of language, the study of poetry, and where and how these intersect and diverge. The PPA makes several arguments and welcomes new scholarship based on the work it gathers. Some of our initial questions include: What if we began to understand poetics in all of its historical, linguistic, and educational valences? What if literary concepts such as meter and rhythm are historically contingent and fundamentally unstable? What might scholars of distant reading the novel learn from a collection of materials pertaining to the study and philosophy of poetry?

Rather than a static repository of historical data, the PPA compels users to rethink the past and future of organizing, navigating, conceptualizing, and historicizing large amounts of data – about a single poem or about evolving and contradictory thinking about the technology of poetic language. Active since 2007, the PPA used the 2017-2019 academic years to work with the CDH development team to redesign a new website, which officially launched in March 2019, while sharing our findings with leading researchers in historical poetics and digital humanities. In the 2018-2019 academic year, the PPA worked to complete the editorial collections and to locate additional items cited in T. V. F. Brogan’s 1981 bibliography. This work was funded by grants from Princeton’s University Committee on Research in the Humanities and Social Sciences (UCRHSS) and a CDH Dataset Curation Grant. Currently, the PPA is continuing work we began with Gale last year to expand our eighteenth-century holdings. Check back for updates!