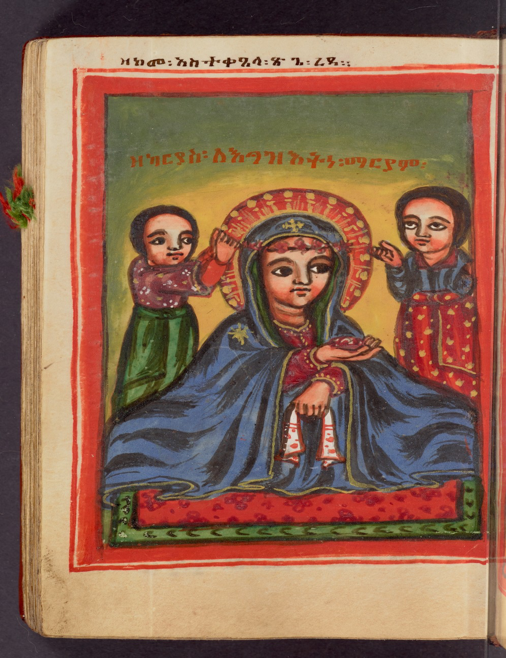 Stories have been told for almost two millennia about the Virgin Mary and the miracles she has performed for the faithful who call upon her name. One of the most important collections of such folktales is the body of almost 700 Ethiopian Marian miracles, written from the 1300s through the 1900s, in the ancient African language of Gəˁəz (also known as classical Ethiopic). These tales, called the Täˀammərä Maryam (The Miracles of Mary), are central to the daily life of 50 million Ethiopians and Eritreans and of special interest at Princeton University, which has in its Firestone Library one of the largest and finest collection of Ethiopic Manuscripts, and Marian miracle manuscripts, anywhere in the world outside of Ethiopia.

Wendy Laura Belcher, professor of African literature in the departments of Comparative Literature and African American Studies, has been studying the Täˀammərä Maryam for some time, ever since she and the Ethiopian priest and scholar Qesis Melaku Terefe catalogued many of the Princeton Gəˁəz manuscripts over the summer of 2009. At her request, in spring 2018, the Library began digitizing its Gəˁəz manuscripts; prioritizing the Täˀammərä Maryam, which are now all digitized and online in Digital PUL. This is causing a surge of global interest, as well as demand for better data about them.

Prof. Belcher then created the Princeton Ethiopian Miracles of Mary digital humanities project (PEMM), a comprehensive resource for these Gəˁəz miracle stories, which was launched in March 2018. The project is aimed at creating a resource for all scholars and to the Ethiopian Orthodox Church community, providing Ethiopians with better access to their patrimony, and raising general awareness about the beauty, breadth, and variety of these vital works of early African literature.

Belcher’s initial work on the digital project was supported during the 2018-19 academic year by a Princeton Center for Digital Humanities Dataset Curation and Public Humanities Grants, pairing the creation of the database with an outreach program addressed at engaging the Ethiopian Orthodox community. The second phase was supported by a CDH Research Partnership, for which the CDH Development and Design Team worked with her to create a robust data structure to store and connect the data, and collaborate on building prototype web interfaces and data visualizations. This was completed in January 2020. Meanwhile, funded by the Council of the Humanities David A. Gardner Innovation Grants for New Projects in the Humanities, Belcher and her team have been refining and adding to the data and analyzing it.

PEMM was designed to answer important research questions. Among them, are questions about dating : When is the earliest attestation of each tale (in which century does each first appear)? Are some stories more popular in some centuries than others? In which century is each tale the most popular? Do some stories fade in popularity over time? What are the themes of the Ethiopian Marian miracle stories? PEMM also seeks to answer questions about order: Is the order of Miracles of Mary stories within manuscripts random? Is there a standard order of stories (e.g., the same 33 first and in the same order; foreign first, indigenous second; early ones first, later ones second)? Does that order change by century or region? Which stories do most manuscripts begin with? Which stories do most manuscripts end with? Also, it seems to answer questions about relationships : Which stories appear most often with which other stories in the same manuscript? Where in manuscripts is each story most likely to appear (e.g., early, middle, late)? Is there a standard collection of stories (e.g., the same 33 told in most manuscripts)? Does the standard change by century or region?

One element of this project is the PEMM Incipit Tool, which was developed by Rebecca Koeser with Nick Budak of the Princeton Center for Digital Humanities to allow users to catalog miracle stories properly across manuscripts. The user identifies an incipit from a story in a Täˀammərä Maryam manuscript. They type that line, using the Gəˁəz script (fidəl), into the empty field at the top of the PEMM Incipit Tool page. They then find out which ID number the story is, and then use that number to find out which story it is in the list of stories. Detailed project information about the stories is also available on Github.

To learn more about this DH project, you may go to the PEMM web page or consult the charter: