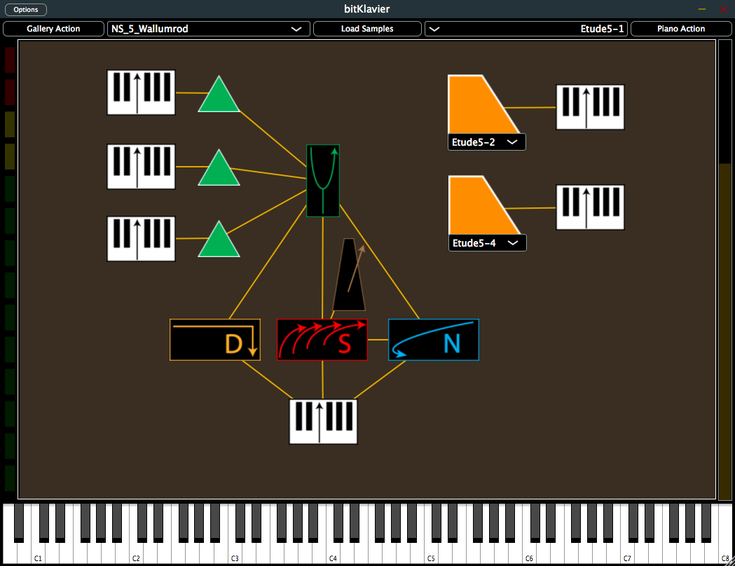 bitKlavier is a software tool for exploring a range of musical ideas via “preparing” the digital piano, inspired by John Cage’s “prepared piano.” These preparations consist of various relatively simple algorithms inspired by conventional machines like the metronome, the reverse tape delay, and others, while also exploiting possibilities native to the digital realm where we are largely freed from normal physical and acoustic constraints.

Digital musical instrument building resides at the murky but charged border between body and computer. On the one hand, we are trying to imagine how we might physically and intuitively relate to sound in expressive, qualitative ways, and on the other hand we are required to code that relationship in precise terms; the significance of this project manifests itself (at least partly) in the ways quantitative and qualitative approaches to understanding can be reconciled, and how we can learn from our failures (which in and of themselves might be fascinating if unexpected).

We continue to extend bitKlavier's functionality in both straightforward and complex ways, while also making the instrument more widely accessible. After a year of work, bitKlavier has been fully reworked. The instrument now features a fun, colorful, and easy-to-use graphical interface in which musical components can be dragged, dropped, and reconfigured to tune the instrument. While the core functionality and vision remains intact, new exciting features continue to creep their way in to bitKlavier, bringing more power and flexibility.

bitKlavier is available for OSX, iOS, and Windows as a standalone application as well as in several audio plugin formats (VST, VST3, AU) for use within notation (Sibelius, Finale, Dorico) and digital audio workstation environments (Logic, Reaper, Digital Performer).