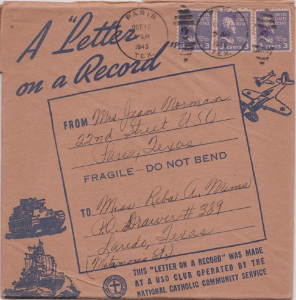 Mapping Phono-Post: Data Visualization and the Media-Archaeology of Voice-Mail presents a series of maps and visualizations for analyzing and exploring the Phono-Post archive, the first ever online audio-visual archive of individually recorded audio letters.

The Phono-Post archive is the product of a multi-year research project directed by Prof. Thomas Y. Levin (Princeton University) at the Friedrich Schlegel Graduate School for Literary Studies at the Freie Universität Berlin, and generously funded by the Einstein Foundation (Berlin), the ongoing endeavor is both amassing and making available to scholars a vast archive of these highly fragile, rapidly disappearing and unique multi-media artifacts.

The standard account of the media-historical transition from the 19th-century phonograph cylinder to the flat “Berliner” gramophone disc is as a shift from a “read/write” technology to a “playback” technology. The gramophone record thus marked the birth of the music-industry as we know it today. Largely occluded by this admittedly important development, however, is the fact that parallel with the rise of the market for pre-recorded records there also was a comparatively smaller but nonetheless not insignificant culture of individual or personal gramophonic recording. In both domestic settings and in special “Voice-o-Graph” booths found at touristic locations (Coney Island, Times Square, the 86th floor of the Empire State Building, etc.), people were making “instantaneous recordings” in huge numbers starting in the late 1920s and continuing up through the early 1960s. These audio equivalents of the polaroid snapshot were recorded directly onto small-format coated cardboard or metal discs that allowed for no post-production alterations or editing during their two-minute duration. Robust enough to be sent through the mail in special envelopes, they were used by musicians to make cheap demo records, by poets to hear how their works sounded, by actors and speechmakers to practice their delivery, and above all by amateurs of all sorts to send to a loved one or friend an audio-letter, a Recordio-Gram, a “personally recorded message for you.”

Such sonic epistles – recorded by soldiers at USO bases, by visitors to amusement parks and arcades, by travelers in train and bus stations, and by families at home – were sent by the hundreds of thousands in the 1930s, 1940s and 1950s in the USA but also throughout Western and Eastern Europe, in many countries in South America, in Australia and in Asia. Yet, there simply was no institution that had systematically documented this important global chapter of 20th-century media culture.

In order to pursue what Thomas Y. Levin understands as the media archaeology of voice mail he established the Phono-Post Project, the first ever archive of individually recorded audio letters. Having finally arrived at the point where the archive has achieved a critical mass, this project aims to develop visualization tools that will enable the archive as a whole to produce entirely new types of knowledge.