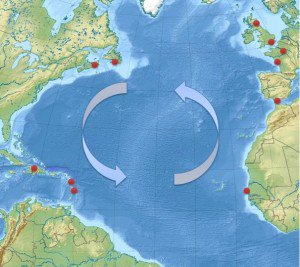 Designing Empire uses Gephi, Palladio, and ArcGIS to unlock the Atlantic-wide origins of the British and French colonial city and develop the paradigm of “circulatory urbanization.” Shifting away from traditional single-city histories, Designing Empire follows the flow of money, experts, and planning ideas across political and geographical boundaries and between urban settlements on the imperial frontier: garrisons, islands, and ports. This project’s long-term ambition is to promote a transnational, flow-based approach to be adopted by urban historians, incorporating spatial evidence and manuscript sources with digital analysis.

In the Enlightenment Atlantic intellectual, mercantilist, entrepreneurial, and surveying networks embarked on experimental schemes to develop the ‘ideal’ colonial urban community: self-sufficient micro-colonies that could be at once peacefully administered, racially and economically ordered, agriculturally efficient, and highly defensible. British and French visionaries imagined such outposts as St. Christopher’s (St. Kitts) and the Ceded Islands, Cap Français, Gibraltar and Menorca, and Fort Louisbourg and St. Pierre as urban laboratories: sites where new concepts in urban planning, fortification, spatial organization, and socioeconomic development could be conceived and tested, before being reproduced in other colonies or at home. Through an exacting reconstruction of these urban sites’ networks, plans, implementations, and consequences, this dissertation demonstrates how early conceptions of city ideas circulated throughout the early eighteenth century Atlantic, fashioning urban models and hierarchies that were to be employed in late eighteenth and nineteenth century colonial cities.