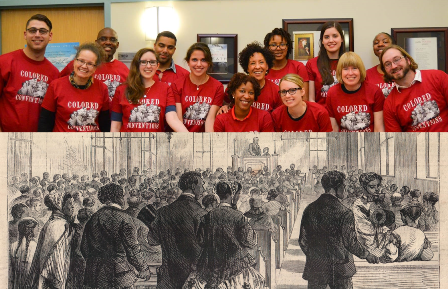 From 1830 until the 1890s, already free and once captive Black people came together in state and national political meetings called "Colored Conventions." Before the War, they strategized about how to achieve educational, labor and legal justice at a moment when Black rights were constricting nationally and locally. After the War, their numbers swelled as they continued to mobilize to ensure that Black citizenship rights and safety, Black labor rights and land, Black education and institutions would be protected under the law.

The delegates to these meetings included the most well-known, if mostly male, writers, organizers, church leaders, newspaper editors, and entrepreneurs in the canon of early African-American leadership—and thousands whose names and histories have long been forgotten. What is left of this phenomenal effort are rare proceedings, newspaper coverage, and petitions that have never before been collected in one place.

This project seeks to not only learn about the lives of male delegates, the places where they met and the social networks that they created, but also to account for the crucial work done by Black women in the broader social networks that made these conventions possible.

ColoredConventions.org endeavors to transform teaching and learning about this historic collective organizing effort—and about the many leaders and places involved in it—bringing them to digital life for a new generation of students and scholars across disciplines and for community researchers interested in the history of activist church, civil rights, educational and entrepreneurial engagement.

This project, co-directed by the CDH's Jim Casey (see the About Us page), has been recognized by awards from the Modern Language Association, the American Studies Association Digital Humanities Caucus, and the Popular Culture Association / American Culture Association. The project has been made possible by support from the University of Delaware, the National Endowment for the Humanities, the Andrew W. Mellon Foundation, and the Council on Library and Information Resources.