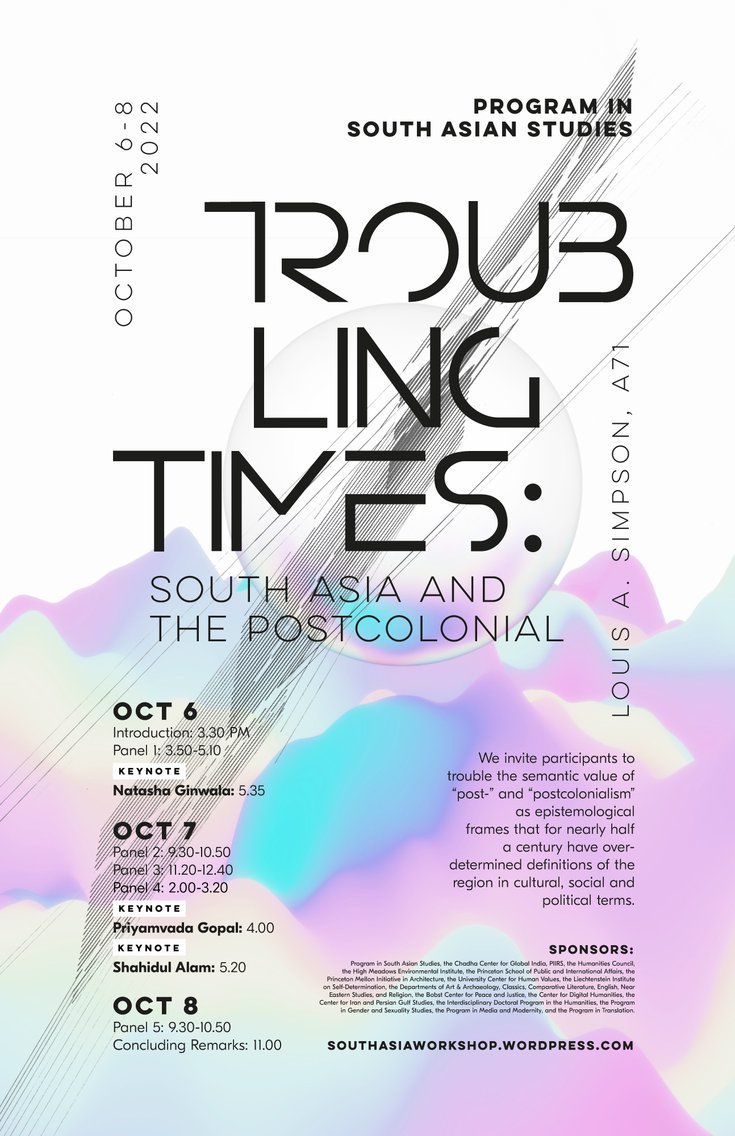 This year’s annual Princeton South Asia Graduate Conference questions the scholarly paradigm of postcoloniality for representing South Asia. We invite participants to trouble the semantic value of “post-” and “postcolonialism” as epistemological frames that for nearly half a century have overdetermined definitions of the region in cultural, social and political terms. This year’s theme asks: what kind of historical timeline does the postcolonial construct? Further, how do the historical junctures implied by these two terms contend with scholarship that increasingly looks towards the decolonial? Is the postcolonial simply another interregnum on a linear timeline including the “pre-colonial” and “colonial” periods and soon to be followed by a post-postcolonial one? Indeed, if the problems of periodization have been discussed extensively, a remnant post-ality continues to predetermine the historical timeline—if not chronology—of South Asia, obscuring the continuities, repetitions, inversions and other temporal disjunctures that define everyday experience in South Asia.

In addition to these temporal questions, does the “postcolonial” deserve its scholarly centrality, or has its legacy of ideological resistance to and critique of colonial power structures been diluted? Are its tools sufficient for conceptualizing our present moment? The omnipresence of the prefix, “post-” is, perhaps, out of joint with the aesthetic and conceptual problems presented by neoliberal globalization today; while the postcolonial paradigm has been fruitful in many ways, the region demands other tools of representation, recognition and meaning-making.

What then, are these tools? What other figurative devices, analytic concepts, scholarly methodologies, historical narratives, and temporal terminologies might describe South Asia? How has the concept of post-coloniality contributed to the hegemonic influence of scholarship on India and Pakistan in South Asian studies? What kinds of knowledges does it produce and restrict about South Asia’s relationship and relevance to other areas defined in post-colonial terms? In what ways were decolonial and anti-colonial imaginaries already present before the legal-juridical process of decolonization were completed? How can we reconcile a “post-colonial” history of South Asia with the neo-colonial practices in the region today? How have South Asia’s pre-colonial histories been mined for ideological and cultural forms in the present?

[Note: Especially relevant to those interested in digital tools is the 2 pm panel on October 7, which includes Aditi Rao’s paper, “‘The Indians Counted 153 Kings’: Iterations Towards (the Dream of) India’s De-Fragmented Classical Corpus.” The “paper intervenes a novel reconstructive tool, the GPT-3, an artificial intelligence-based language prediction model, to ‘complete’ perhaps the most recognizable history concerning Indian antiquity, Megasthenes’ Indica.” (read the abstract)]

Co-sponsored by the CDH