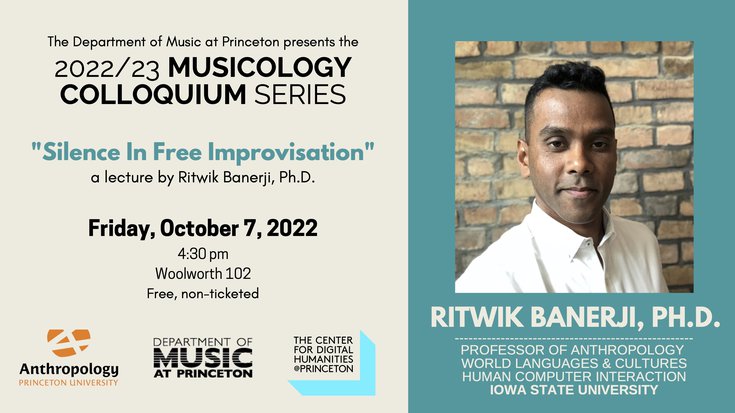 What does it mean when one or more improvisers remains silent in the midst of an improvised performance? While music scholars have given substantial attention to the meaning of musical silence, this has focused almost exclusively on its meaning in the performance of fully notated, composed works. The meaning of silence in the context of improvisation carries a fundamentally different meaning as it is not the result of composerly prescription, but the individual discretion often inherent to improvisation. At the same time, like silences in other forms of human communication (i.e., conversation), improvisatory silences are prone to ambiguity.

This talk examines the meanings performers attribute to silence in improvised musical interactions through an experimental ethnographic methodology in which I have designed a variety of artificially intelligent virtual performers of free improvisation and subjected these to the critique of human performers of this musical practice. Because such systems are not human, but still humanlike, this methodology enables musicians to discuss elements of their experience of free improvisation as a form of human interaction that they would not normally discuss (and in particular, critique) regarding the behavior of a (biologically) human co-performer. Among the many themes performers have critiqued about these systems, their interpretation and deployment of silence has been a consistent topic. As is the case in language, the meanings performers attribute to silence are diverse, including silence as an expression of politeness, disapproval, or weakness, to silence as a dimension of gender performance (and difference), the relationship between musical improvisation and conversation (through language), to the notion that voluntary silence is a critical performative element of humanness.