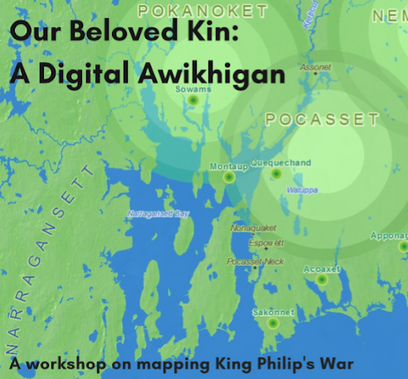 Awikhigan is an Abenaki word that originally referred to writing & drawing on birchbark but has evolved to include bound books, letters, and maps, as well as works of art. Now it encompasses digital storytelling and GIS mapping. In this workshop, Lisa Brooks will introduce a digital awikhigan, inviting participants to follow multiple narrative/image paths that run parallel with her new book, Our Beloved Kin: A New History of King Philip’s War.

After framing the project within lenses drawn from digital humanities and Indigenous studies, Brooks will guide users through the complex historical geography of this sprawling conflict, which transformed Native and colonial space in New England, using an array of primary sources, including historical documents, maps, and contemporary place images. She will highlight interactive digital maps, created for the project, that trace historic trails and waterways, Native towns and territories, colonial settlements, and crucial sites of refuge and subsistence. Multiple intertwined digital “paths” form a rhizomatic structure, enabling a decentralized, nonlinear “reading” of the conflict and its context.

Lisa Brooks is Associate Professor of English and American Studies at Amherst and the author of Our Beloved Kin: A New History of King Philip’s War (Yale University Press 2018). Her first book, The Common Pot: The Recovery of Native Space in the Northeast (University of Minnesota Press, 2008), received the Media Ecology Association's Dorothy Lee Award for Outstanding Scholarship in the Ecology of Culture in 2011. Although deeply rooted in her Abenaki homeland, Brooks’s work has been widely influential in a global network of scholars. She served on the inaugural Council of the Native American and Indigenous Studies Association (NAISA), and currently serves on the Editorial Boards of SAIL and Ethnohistory. She also works on the Advisory Board of Gedakina, a non-profit organization focused on Indigenous cultural revitalization, traditional ecological knowledge, and community wellness in New England.

Professor Brooks requests that everyone brings or has access to a digital device for the workshop (laptop, tablet, or desktop), and that they explore the digital project in advance of the event.

The workshop is co-sponsored by the Princeton American Indian Studies Working Group (PAISWG) and the Center for Human Values.