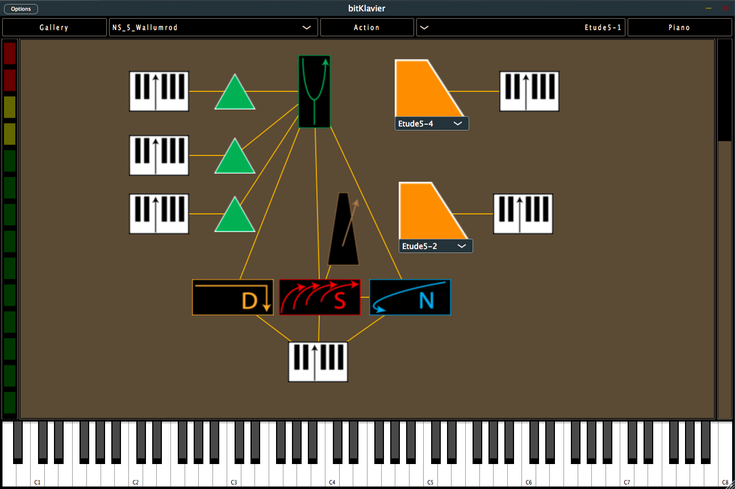 In this workshop, we will explore the musical possibilities of bitKlavier, a novel digital instrument that extends and subverts the traditional piano interface. The session is open to novice and expert musicians. We will lead attendees through sequential exercises using the software, empowering them to perform, create, and compose with the instrument on their own accord. We will explore bitKlavier from the ground up as we unpack bitKlavier-specific terminology: Piano, Gallery, and Preparations; Direct, Synchronic, and Nostalgic; Tuning and Tempo.

Space is limited so pre-registration is strongly encouraged (though not required) : https://goo.gl/forms/TTbyp8PxAnZDZXP22

If possible, download the app at bitklavier.com or through the Apple Store before arriving for the workshop.

John Cage’s “prepared piano” used screws and bolts, inserted between strings, to produce unusual sounds. bitKlavier, a software tool developed by Princeton Music professor Dan Trueman, uses algorithms. Like the prepared piano, the prepared digital piano is full of surprises — virtual strings transform, tighten, and loosen on the fly, turning it into an instrument that pushes back, sometimes like a metronome, other times like a recording played backwards. bitKlavier is an innovative software at the intersection of music theory, electronic music, and computer programming for performers, composers, teachers and students.

bitKlavier is an open-source project developed by Dan Trueman and Mike Mulshine that runs on MacOSX, iOS, and Windows. bitKlavier has been used by dozens of performers—from young students to renowned professionals—in a range of compositions by Trueman and others. A new online course— Reinventing the Piano —presented by Kadenze makes extensive use of bitKlavier to teach about the history and ongoing development of the piano.

Currently there are two volumes of music composed for and with bitKlavier: Mikroetudes, is a collection of short pieces by a diverse set of composers, and Nostalgic Synchronic Etudes, by Dan Trueman. Dan has also used bitKlavier in several of his new chamber works, including Olagón (for Eighth Blackbird and Iarla Ó Lionáird), Songs That Are Hard to Sing (So Percussion and the JACK Quartet), Marbles (the Crash Ensemble), and A Palimpsest (a micro concerto for alto saxophone and percussion ensemble) . Some of these works will be featured in Carnegie Hall on March 6, 2018 by the Sō Percussion JACK Quartet. Trueman’s work has been featured in the New York Times (October 2015).

Development of bitKlavier has been sponsored by the American Council of Learned Societies, the New Jersey State Council on the Arts, and Princeton University’s Center for Digital Humanities, Council on Science and Technology, Council of the Humanities, and Department of Music.

Dan Trueman is a composer, fiddler, and electronic musician. He began studying violin at the age of 4, and decades later, after a chance encounter, fell in love with the Norwegian Hardanger fiddle, an instrument and tradition that has deeply affected all of his work, whether as a fiddler, a composer, or musical explorer. He has composed for small ensembles and for orchestra, for voice, for electronic instruments of his own design, and he regularly performs as part of his work.

Mike Mulshine received his Bachelor of Arts in Music and Certificates in (1) Applications of Computing and (2) Electronic Musical Performance from Princeton University in 2016. Since then, he has joined the Princeton University Music Department staff as Research Specialist in Electronic Music. He works closely with Jeff Snyder and Dan Trueman developing new musical instruments and assistant directs the Princeton Laptop Orchestra. Mike is also a composer and multi-instrumentalist performing regularly in New Jersey, New York, and Pennsylvania.

Florent Ghys is a composer and double bass player from Bordeaux, France. His music has been described as '' highly contrapuntal, intelligent...and inventive... '' (WQXR), and a '' thrilling breed of post-minimal chamber music '' (WNYC). He performs both solo and with his group Bonjour, a low string and percussion quartet. In addition to performing his own music, Florent Ghys continues to be commissioned by some of today’s most exciting soloists and ensembles, create music for film, and produce, arrange, and program for other artists.