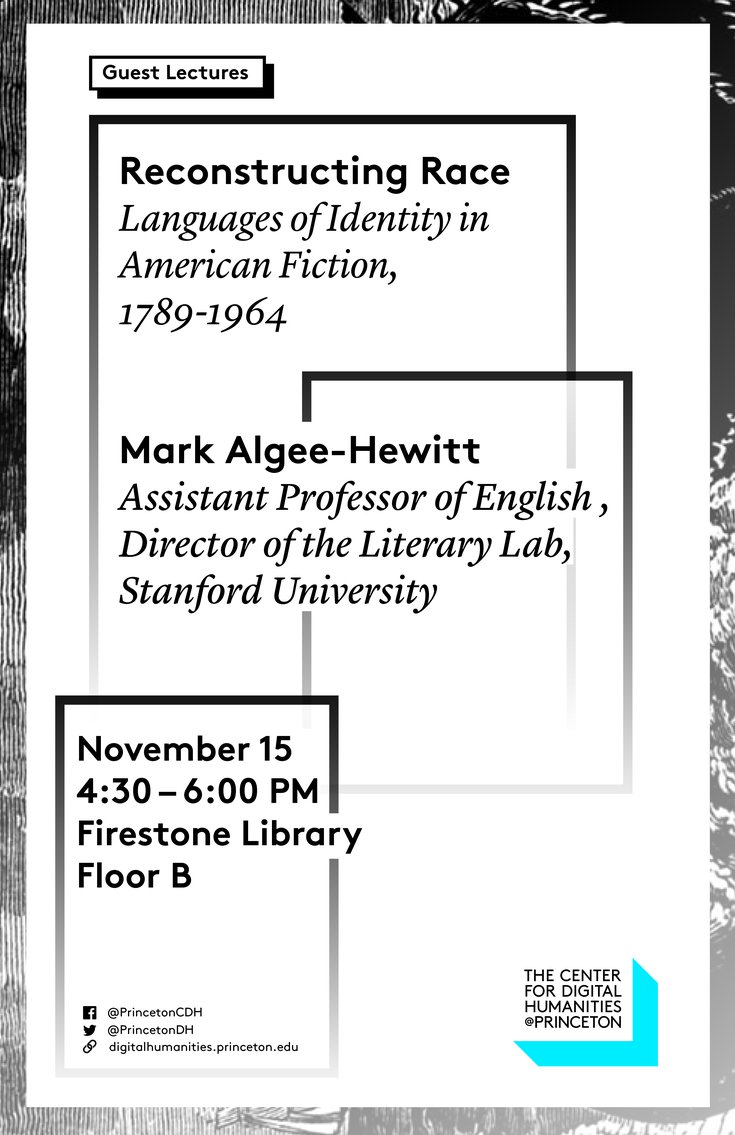 How does the discourse of race stabilize around different ethnic groups in different contexts in American long-form fiction? How do these individual discourses change over time? The project draws on a new collection of American fiction from Gale (based on the Wright bibliography) and explores the tension between the background discourse of race (the racial unconscious) and the ways in which individual characters react against (or with) the generalized language of ethnicity or ancestry.

Mark Algee-Hewitt’s research focuses on the eighteenth and early nineteenth centuries in England and Germany and seeks to combine literary criticism with digital and quantitative analyses of literary texts. In particular he is interested in the history of aesthetic theory and the development and transmission of aesthetic and philosophic concepts during the Enlightenment and Romantic periods. He is also interested in the relationship between aesthetic theory and the poetry of the long eighteenth century.  Although his primary background is in English literature, he also has a degree in computer science. As the co-associate research director of the Stanford Literary Lab, he is working to bring his interests in quantitative analysis, digital humanities and eighteenth-century literature to bear on a number of new collaborative projects. His current book project, The Afterlife of the Sublime, explores the history of the sublime by tracing its discursive patterns through over 11,000 texts from the long eighteenth century, seeking clues to the disappearance of the term at the end of the Romantic period. As a Mellon Postdoctoral Fellow at McGill University, working with the Interacting with Print Research group, Dr. Algee-Hewitt was also involved in a variety of projects that combine literary interpretation with quantitative analysis. He is a co-coordinator of the Book History BiblioGraph, a new dynamic online resource and recommendation engine that visualizes connections between contemporary resources on Book History using statistical methods. He is also working with Andrew Piper on the Werther Topologies: a project that seeks to identify lexical patterns that will aid in tracing the impact of Goethe’s Sorrows of Young Werther on the nineteenth-century development of the German novel. Dr. Algee-Hewitt has taught a variety of courses in literary history and theory in both the English and German departments at McGill University, Rutgers University and New York University where he received his PhD in 2008.